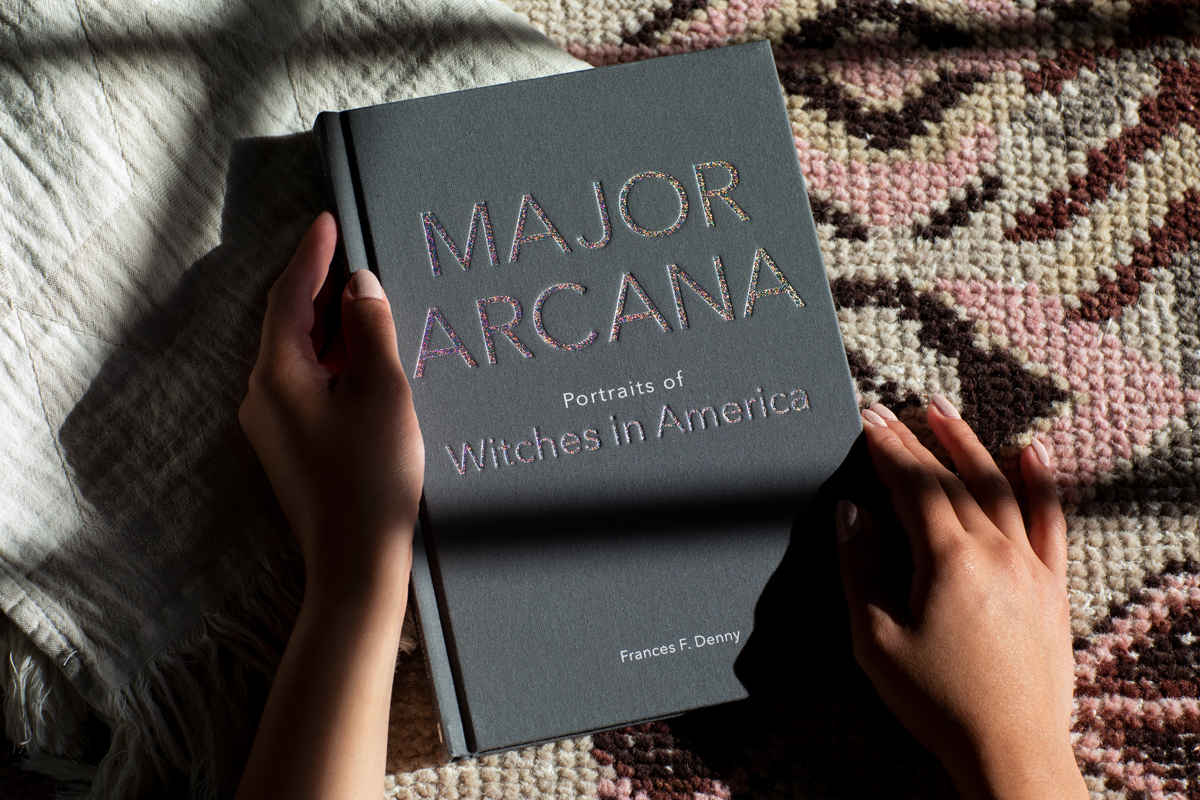 Major Arcana and the Magic of Poetry: 7 Questions with “Word Witch” Kate Belew

In Major Arcana: Portraits of Witches in America, published by Andrews McMeel last month, renowned photographer Frances F. Denny has gathered more than 50 portraits of modern-day witches from across the U.S. Alongside these fascinating, intimate shots, quotes and stories from the witches provide powerful context. This ambitious project reveals witchcraft’s many diverse meanings, deep feminist significance, and integral connection to writing and other creative art.

Kate Belew, one of several poets featured in Major Arcana, spoke with Read Poetry about her identity as a “word witch,” her experience being photographed for the book, and how spirituality serves her writing process.

Kara Lewis (KL): In Major Arcana, you describe yourself as a “word witch.” What does this mean to you?

Kate Belew (KB): Frances took my photo for Major Arcana about four years ago. It was kind of like a time capsule reading what I had told her. I had just moved to New York City in that photo. I grew up in rural Michigan and was embarking on my self-exploration.

I think the term Word Witch was new to me then. It’s been ever-evolving, as has been my identity as a writer, poet, woman, and witch. I believe that language has been my medium of magical choice and channeling. Poetry has always felt like spell work to me. It’s something that’s crafted and released into the world—even if it’s just for yourself—like many spells.

Often, I’ll sit down to create and the words appear to me as if I’ve been carrying them around inside of myself the whole time, or as if they’re coming up through the earth to make themselves known. KB: I’ve been writing poetry since before I knew how to write. I used to dictate poems to my mom to write down.

My Grandma Lucy used to read to me a lot. The stories were very witchy, though I’m not sure if Lucy would have described herself as that. I think through Lucy I had my first encounters with fairies, Baba Yaga, the veil, and Tarot.

All the books I read as a kid were about witches and fairies and fell into the “fantasy” category. My best friend Jules and I had a whole invented world in the field behind Lucy’s house that we called Avalon.

I don’t know if I ever would have called myself a witch then. Small towns in Michigan don’t have a lot of room for poets or witches. New York City afforded me a lot more freedom in identity and has allowed me to be more public about that practice and identity.

KL: How did witchcraft change or inform your writing process?

KB: I think witchcraft opened me up to a canon of myth, story, and intuition that has impacted my writing. I write intuitively. I ask for guidance on how to edit for clarity.

So many people have carried this wisdom at great cost. I have a lot of privilege, and because of that, I feel like I have a responsibility in my art and practice to show up in the many ways that can mean.

Witchcraft has reframed the world for me. It has changed and encouraged the weaving my way back through my life and the lives before, hoping to honor that. Writing is a way to make those leaps.

KL: How can poets connect with their craft as magic or ritual?

KB: I think just being still and open to intuition as you sit down to write can do a lot.

Sometimes, if I’m having trouble accessing that part of myself, I’ll do something that will help guide my body there. Lighting a candle, burning some herbs, something to signal that it’s time to write now can help infinitely and is a part of ritual.

I think the ritual and magic that lies within paying attention is the best tool a poet and writer can have.

KL: What was the experience of being photographed for Major Arcana like?

KB: Frances came to my apartment and I really wasn’t sure what to wear, or how to be in my new space.

I remember feeling so at peace knowing and trusting that Frances saw me at that moment. Now, looking back at that photo, I have so much love and compassion for the younger version of myself that’s captured right there. I was 23 and setting out on a new adventure.

Looking at this book, I’m so grateful to be included. There are so many witches who I admire in its pages, and it feels like absolute magic.

KL: What do you wish more people understood about witchcraft today?

KB: In the foreword to the book, Pam Grossman writes, “It can be argued that the image of the witch is one of the earliest examples of widespread propaganda against women.”

I hope those outside of the witchcraft community can hold more space and embrace the imagery of the witch.

KL: What do books like Magic Arcana add to the cultural conversation about witchcraft?

KB: Part of the reason I love this book so much is because it shows how many different ways there are to be a witch. It holds them all together.

It’s a celebration, a statement, and a piece of witchy, strange magic.